Organic growers to get critical help in battling deadly disease 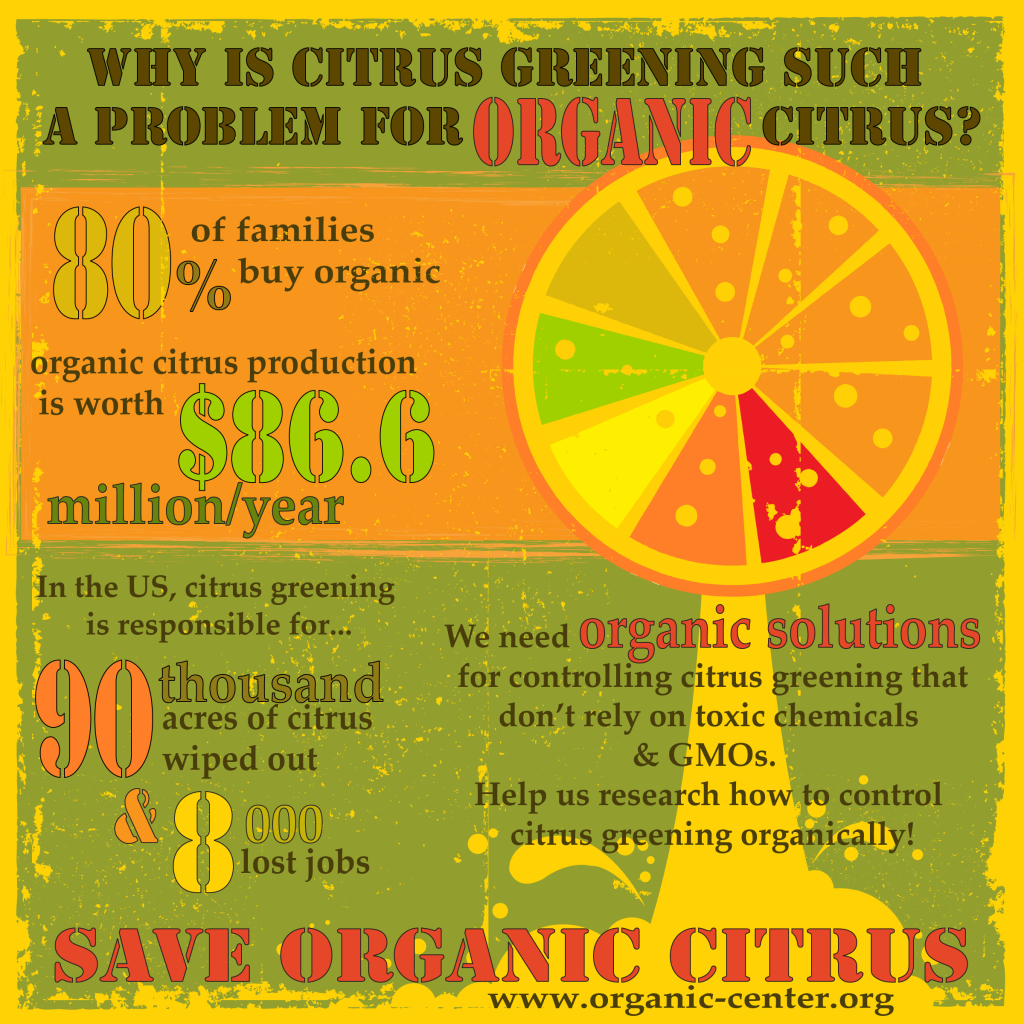 But a devastating bacterial disease known as citrus greening is now threatening the livelihood of America’s citrus growers and the healthy diets of millions.

To answer that threat, The Organic Center has kicked off a major multi-year study and fundraising campaign to find organic solutions to ward off citrus greening and help organic citrus growers fight the deadly disease without resorting to dangerous chemicals or genetic engineering.

The Organic Center, an independent non-profit educational and research organization operating under the administrative auspices of the Organic Trade Association (OTA), is launching a comprehensive and high-profile drive to raise its target of $310,000 for its three-year study, using its presence on social media to spread the message. For the first time in its history, The Organic Center is inviting individuals to help the effort by donations through crowdfunding athttp://www.rkthb.co/44990.

A $45,000 grant from the UNFI Foundation has laid the foundation for the drive. The UNFI Foundation is concerned that the bulk of research thus far to control citrus greening disease, or Huanglongbing (HLB), has focused on conventional strategies that have had only limited success in the short-term, and are not allowed – and thus not even an option -- for the organic citrus growers struggling with the disease.

“Especially in this era of climate change, new pests and voracious diseases, organic agriculture deserves as much money for research as conventional agriculture. We must invest in non-toxic ecological solutions for now and for future generations,” said Melody Meyer, director of the UNFI Foundation and president of the Board of Directors of OTA..

The American appetite for organic fresh citrus and citrus juice is big and growing. According to recent statistics compiled by OTA and the fresh fruit industry, organic fresh fruit sales in 2013 (with citrus ranking among the most popular of organic fruits) grew some 24 percent and organic citrus juice sales rose 26 percent, benefitting both organic citrus growers and health-minded consumers. That growth could be stalled by citrus greening.

Citrus greening disease threatens the citrus industry on a massive scale. It has devastated millions of acres of citrus crops throughout the United States and abroad, ravaging countries in Asia, Africa and South America. The destructive disease spreads quickly, and within four to five years can kill a tree.

In the United States, the disease was first discovered in Florida in 2005. It is carried by the tiny Asian citrus psyllid. The insects inject a bacterium into the tree, which stops the flow of water, nutrients and minerals between the tree’s roots and its leaves and branches, leading to yellowing leaves, green and bitter fruit, premature fruit drop and eventually the destruction of the tree.

Some estimates are that 99 percent of the citrus orchards in Florida—the biggest citrus producer in the nation with a $9 billion citrus industry—have been infected. In California, the country’s leading producer of organic citrus, and Texas, with some 40,000 acres of conventional and organic citrus orchards, the insect that causes the disease has also been detected. Aggressive efforts are underway in those states and other citrus-growing areas to try to keep the deadly disease in check.

Conventional strategies have not yet proven effective and have contributed to policy decisions that are not compatible with organic management. For example, applications of toxic synthetic pesticides have been mandated as an eradication method in California citrus groves, including certified organic groves, in regions where the psyllid has been detected, but no organic alternatives have been offered as substitutes for these mandatory spray regimes.

The UNFI grant will be applied to a three-year research project being led by The Organic Center, in collaboration with University of Florida entomologist Michael Rogers and Ben McLean, vice president and director of research for Uncle Matt’s Organic, to find holistic organic solutions to controlling citrus greening.

Uncle Matt’s Organic has been using a four-pronged organic approach to fight citrus greening for more than a year, and results have been positive. The approach involves biological controls, application of the mineral nutrition boron, slow-release nitrogen fertilizer, and spraying with botanical oils.

McLean is optimistic that the lessons learned from his orchard and the additional research now made possible by the grant will help organic growers around the nation live with the disease and keep it under control through safe, organic strategies.

Meyer of UNFI hopes this first grant will encourage others to help organic growers fight the disease. “My hope is that everyone in the community comes on board and gives something to support this valuable research,” said Meyer.

Individuals can join the effort to help organic citrus farmers fight this deadly disease by going to
http://www.rkthb.co/44990.

About The Organic Center
The Organic Center's mission is to convene credible, evidence-based science on the health and environmental benefits of organic food and farming, and to communicate the findings to the public. As an independent non-profit 501(c)(3) research and education organization operating under the administrative auspices of the Organic Trade Association, The Center envisions improved health for the environment and for people through the conversion of agriculture to organic methods.