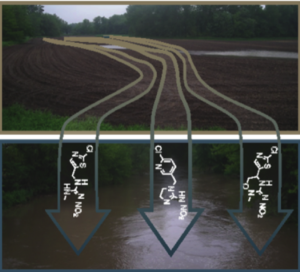 A recent study by the United States Geological Survey (USGS) has found that neonicotinoids are polluting streams throughout the Midwest. Neonicotinoids are a class of pesticides used as insecticides throughout the United States. Although they dissolve readily in water, they are slow to break down in the environment, resulting in a high risk of runoff from agricultural fields into water sources. USGS researchers examined rivers that drain most of Iowa, and parts of Minnesota, Montana, Nebraska, North Dakota, South Dakota, and Wisconsin for the presence of neonicotinoids, and found the chemical present in all nine rivers studied.

“We noticed higher levels of these insecticides after rain storms during crop planting, which is similar to the spring flushing of herbicides documented in Midwestern U.S. rivers and streams,” said lead author Michelle Hladick. “In fact, the insecticides also were detected prior to their first use during the growing season, which indicates that they can persist from applications in prior years.”

The use of neonicotinoids has skyrocketed in recent years, and has been associated with bee deaths. Neonicotinoids have also been linked to decreased health in fish, bats, and birds.

These adverse effects on animal health can be seen at very low concentrations. The study found neonicotinoid levels in rivers at levels that are known to be toxic to wildlife. For example, imidacloprid has been determined to be toxic to aquatic organisms at very low levels: 10-100 nanograms per liter.

These findings are especially worrisome as the use of neonicotinoids continues to spread. One of the areas where neonicotinoids are being used heavily is by the conventional citrus industry to control the spread of citrus greening disease. The use of neonicotinoids on citrus is having detrimental effects on pollinator populations, but little research has been done exploring non-toxic methods for controlling the disease. The Organic Center has launched a campaign to find organic alternatives to these harsh chemicals. Learn about our efforts and what you can do to help here:  http://www.rockethub.com/projects/44990.