The Organic Center collaborates in new study that finds

WASHINGTON, D.C. (April 9, 2020)—Nitrogen is part of the foundation for all life. But too much of a certain form of nitrogen – reactive nitrogen – can threaten both people and ecosystems, and cause a cascade of environmental problems. A new study led by researchers at the University of Virginia and co-authored by The Organic Center shows that organic farming practices can help prevent the global accumulation of reactive nitrogen, and scale back the presence of one of the major contributors to climate change.

Published this month in the scientific journal Environmental Research Letters, the research confirms that the biggest difference between organic and conventional farming is that organic farming helps reduce the buildup of reactive nitrogen by using recycled nitrogen sources like compost and other natural soil amendments. Across all food groups, organic production releases around 50% less new reactive nitrogen to the environment.

“While most climate change media coverage focuses on carbon emissions, nitrogen is a critical--and often overlooked--part of the equation,” says Dr. Jessica Shade, Director of Science Programs at The Organic Center and a co-author of the report.

Nitrous oxide (N2O), she explains, is a potent greenhouse gas, with over 300 times the global warming potential of carbon dioxide. Agriculture is the largest human source of N2O, contributing over two thirds of N2O emissions. Synthetic fertilizer application on conventional crops (especially corn and soybeans) is one of the leading sources of N2O emissions in agriculture, and also leads to nitrate leaching into groundwater. 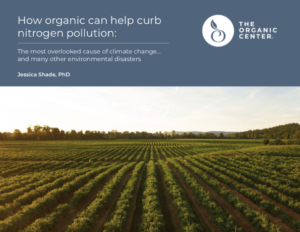 As a companion piece to the published scientific study, The Organic Center has developed a report titled “How organic can help curb nitrogen pollution: the most overlooked cause of climate change...and most other environmental disasters” that succinctly describes the findings and puts them into perspective with other research.

Organic helps keep nitrogen out of the global pool

Most nitrogen does not contribute to air or water pollution. But when that nitrogen goes through a process called “fixing,” it becomes reactive. Reactive nitrogen is what’s used for plant and animal growth, but it also can cause a host of environmental problems. More and more of the benign nitrogen on earth is getting transformed into the reactive form, primarily through the creation of synthetic fertilizer.

Organic agriculture does not use synthetic fertilizer. Instead, all the nitrogen on organic farms comes from recycled sources like compost, or a small amount of new reactive nitrogen from nitrogen-fixing bacteria in the roots of cover crops or other legumes. Those same sources also build a complex and rich soil able to hold onto nitrogen longer rather than just allowing it to run off the field.

The results of this study show that not only is organic adding significantly less to the global pool of reactive nitrogen, it can also help put nitrogen waste that could otherwise contribute to nitrogen pollution back into food production. By using manure and food waste as fertilizer, organic helps keep nitrogen losses from other farm systems from entering the environment.

The study also points to the need for further research to improve our understanding of how organic agriculture could help reduce nitrogen loss to the environment. These include examining:

These soil health benefits also provide advantages when it comes to nitrogen pollution. Organic soils have the potential to store more nitrogen rather than losing it to leaching and runoff. The higher organic matter content allows the healthy soil to hold more positively charged molecules of mineral nutrients such as nitrogen. This can reduce nitrogen pollution by keeping reactive nitrogen in the soils, where it can be used by crops, instead of being lost to the environment.

Organically managed soils tend to have higher water-holding capacity, porosity, and aggregate stability than conventionally managed soils, which can lead to higher yields in extreme weather events such as droughts and flooding. The bottom line: organic agriculture can help farmers maintain steady yields in the face of extreme weather events associated with climate change.

The Organic Center's mission is to convene credible, evidence-based science on the health and environmental benefits of organic food and farming and to communicate the findings to the public. The Center is an independent non-profit 501(c)(3) research and education organization operating under the administrative auspices of the Organic Trade Association