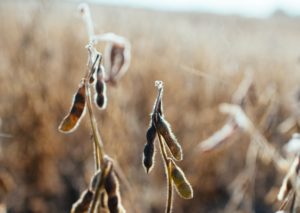 According to a new study in the journal Foods, conventional farmers are now using twice as much glyphosate spray as they did in the late 1990s when the GM crops became popular, largely because weeds have been developing resistance to glyphosate over time. As a result, residues of glyphosate in crop plant tissue are also increasing. New research suggests these residues can be harmful to animals who eat the contaminated crops. Genetic engineering, which is prohibited in certified organic crop production, allows crops such as corn and soy to be tolerant of herbicides like glyphosate. These herbicides would normally kill the crop when sprayed, but with herbicide tolerance, weeds can be controlled within the crop fields by using sprays instead of holistic or mechanical practices that are used in organic farming. Genetically modified, glyphosate-tolerant (GT) soybeans now dominate the global production of soy, which is mostly used for livestock feed.

The study also explored whether the residue concentration found in soy from actual farms could affect the health of animals who eat it. Researchers reviewed studies that compared the health and survival of aquatic invertebrates that were fed GT soy versus certified organic soy, and found that animals who ate the organic feed had a higher survival rate and faster reproduction. When the invertebrates were given higher doses (up to those found on Iowa farms), their rate of survival and body size were reduced, and it took longer to reach sexual maturity. While the organisms tested are smaller than humans, the significant health effects suggest that more safety testing should be conducted with concentrations that are found in actual farms instead of the much lower concentrations that have been reported by the industry. This study also shows that consuming organic soybeans can help you avoid the risks associated with glyphosate, which is prohibited from organic production.