The beautiful island of Ometepe, Nicaragua, is home to one of the world's newest organic agriculture community groups! Promotores de la Agricultura Organica de Los Angeles, Ometepe (PAOLAO) formed spontaneously after a group of villagers attended a workshop on organic agriculture taught by another campesino-run group from northern Nicaragua. 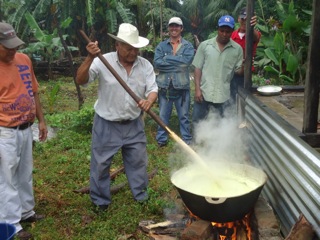 Five years ago, I served as a staff physician in the island's only hospital. Ometepe is a very medically-underserved area, having fewer than 15 doctors for a population of 40,000 people, most of whom are farmers. The majority of farmers grow some combination of a staple subsistence crop for their own consumption, such as beans, rice, or corn, and/or a cash crop for sale, commonly tobacco, plantains, or sesame. Use of pesticides is rampant and I saw many of my patients acutely poisoned by pesticides, as well as many families storing pesticides in their kitchens and other unsafe areas. Most families have members who have been acutely poisoned by pesticides, as safety precautions are minimal. No mechanism exists in most of the nation of Nicaragua to measure long-term harm caused by chronic exposure. Additionally, malnutrition, vitamin and mineral deficiency, and diet-linked chronic diseases such as diabetes and hypertension are common. Very few families grow vegetables for their own consumption, and the diet is mainly composed of staple starches with vegetables used generally as a condiment, rather than a main portion of the plate. Nutritional literacy is very low. In 2010, UNESCO named this magical island a Biosphere Reserve. However, this status currently exists largely on paper – few resources have been devoted to conserving the natural beauty of its volcanoes, cloud forest, and beaches. 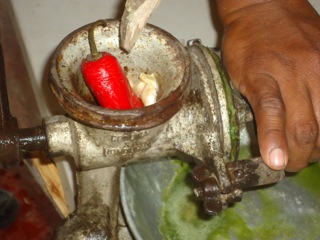 In 2012, the North American Institute of Medical Herbalism, in Boulder, Colorado, sponsored a group of campesino farm educators to come to the island and give a preliminary workshop on organic techniques such as soil remineralization, homemade organic fertilizer, and natural pesticides and pest control, as well as the risks of exposure to pesticides. An intern with a farming background, Stephanie Sutten, also an herbalist and nutritionist, helped organize the workshop in conjunction with Natural Doctors International, a nonprofit which has run a medical clinic on the island for many years (www.ndimed.org). She conducted a survey of farming practices, finding that farmers are using many pesticides banned in North America such as DDT.

The organization that gave the workshop, FEDICAMP (Federacion de Desarollo Integral entre Campesinos y Campesinas, or Holistic Campesino Development Federation), uses popular educational methodology that allows the training to be easily accessible to rural farmers of low to zero literacy. The participants were largely of low literacy but with a lifetime of farming experience, and for them, the training was an inspiring success. Out of the enthusiasm that bubbled up from the experience, the majority of attendees decided to form a community group to continue their education in organic agriculture. PAOLAO members started a community garden, where they amended the soil with techniques learned in their training and planted vegetable starts.
The group is currently seeking support to continue their learning in organic agriculture. They would like to learn more about growing a home vegetable garden, companion planting, worm cultivation, composting, herbs and nutrition, and cooking with vegetables. The long term objectives of this training include improving the nutritional status of islanders, reducing acute and chronic harms to human beings and the island ecosystem in which they live, and development of community organizational capacity amongst the farmers of Ometepe. Clearly, there are a myriad of directions in which this project could continue, including the use of organic techniques in commercial agriculture on the island, and the promotion of local sustainable agricultural products for commercial sale on the island, for which there is currently no mechanism. Access to this training is a potential seed for a tree with many healthful branches for the people of Ometepe.
The North American Institute of Medical Herbalism hopes to connect these farmers with supporters and/or volunteers from the organic community who can help make this happen. 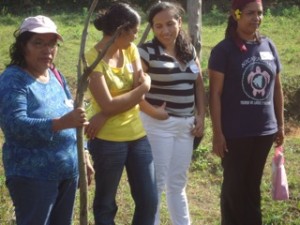 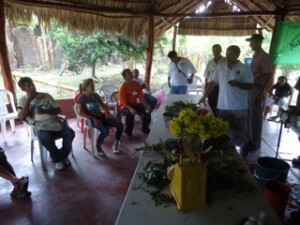 Tania Neubauer, ND, LMT, is a naturopathic doctor, herbalist and massage therapist. She has a passion for community health including extensive work with the Berkeley Free Clinic, La Clinica de Guadalupe (a Latino community clinic in Salem, Oregon) and Natural Doctors International (a nonprofit working to bring natural medicine to global health). Through this nonprofit, she served as a primary care doctor in a small rural Nicaraguan hospital, using naturopathic methods such as herbal medicine, nutrition, and bodywork, as well as conventional treatments. She has traveled throughout Central America and Mexico connecting with natural medicine practitioners in every country. She continues to bring herbal/medical delegations to Nicaragua each year (www.medherb.com/nicaragua.html). She serves on the faculty of the North American Institute of Medical Herbalism. She currently resides and practices in Portland, Oregon. For more information or to get involved, contact Tania Neubauer, ND, LMT at tanianeu@yahoo.com. 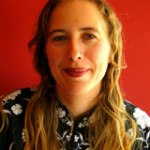