The fall harvest brings a bounty of tomatoes that can be hard to keep up with. If you have the room, one trick is to put whole tomatoes into freezer bags and store in the freezer, pulling them out to make sauce on the spot, any time of the year. You can also store pre-made homemade tomato sauce in the freezer, and pull out what you need for sauces year-round.

Freezing tomatoes removes one of the hardest steps in making tomato sauce from scratch: peeling. Normally, to peel tomatoes, you need to blanch them in boiling water and then dunk them in an ice bath to release the skins. To peel frozen tomatoes, all you have to do is run them under warm water and the skins usually fall right off (some varieties are harder to work with than others). Large tomatoes make this process even easier since you have fewer to peel.

This recipe is designed to use up a large quantity of tomatoes, although you can adjust to make any size batch. Use this sauce as a base to tailor to any style of dish you want by adding herbs and/or spices later. Choose organic tomatoes when you can for the best flavor without pesticide contamination.

According to a recent study published in the Journal of Food Processing and Preservation, both fresh and frozen organic tomatoes beat out their conventional counterparts for flavor and antioxidants, and were pesticide-free when tested. Pesticides were detected in fresh conventional tomatoes, and again after being frozen for three months. 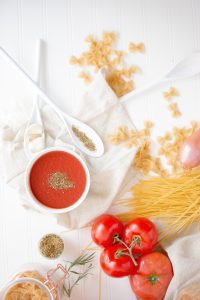