When you make this recipe be sure to use wild, sustainably caught salmon, and help contribute to native fish health and population strength!

A recent study found that GM salmon could be posing a threat to native fish through hybridization with common trout.  The research shows that the offspring of genetically modified (GM) salmon and wild brown trout could pose a risk to wild fish species, because hybrids formed between the two species can out-compete both parent species for food, suppressing the growth of GM salmon by 82%, and suppressing the growth of wild populations of fish by 54%.

"These findings suggest that complex competitive interactions associated with transgenesis and hybridisation could have substantial ecological consequences for wild Atlantic salmon should they ever come into contact [with GM salmon] in nature," wrote the study authors.  Unfortunately, the contact between GM salmon and wild fish may become more frequent in the future, as fisheries farming GM fish continue to expand.  The researchers warn that "escapes and introductions of domesticated salmon can increase rates to as much as 41%," which could result in the slow spread of GM genes. 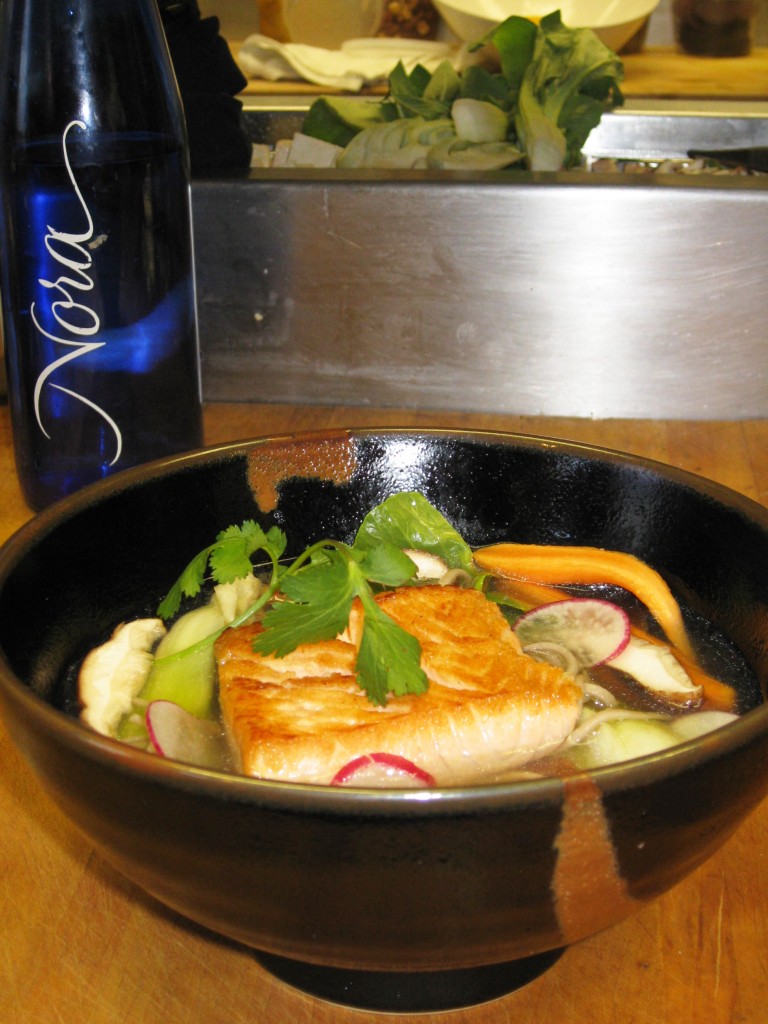 Soak the Pad Thai noodles or rice sticks in hot tap water for 3 minutes or until softened.  Drain.

Mince the ginger, lemongrass, lime leaves, and jalapenos together by hand or in a small chopper. Bring the water to a boil in a medium saucepan and add the minced mixture to it. Season to taste with nuoc mam. This broth can be made ahead and used later.

Bring broth back to a boil and add the carrots, shiitakes, green onions, and drained noodles. Simmer about 1 minute.

Just before serving, stir in tat soi or watercress so they stay green and crisp.

Heat a sauté pan large enough to hold the four salmon filets. Add the oil and seasoned salmon filets. Sear for 3 to 4 minutes on one side. Turn with a spatula and finish cooking for another minute or two until your desired doneness.

To serve, ladle the broth into 4 large soup bowls, dividing the vegetables and noodles evenly.  Top with the salmon and garnish with cilantro.