The Effects of Organic Farming Practices on Nitrogen Pollution

The Effects of Organic Farming Practices on Nitrogen Pollution

The Organic Center collaborated with Professor James Galloway’s team at the University of Virginia to investigate the effect of different farming systems on nitrogen pollution.

Over the last century food production has played a large role in the increased production of excess reactive nitrogen (all nitrogen forms other than N2).  This overabundance of nitrogen accumulates in the environment, leading to nitrogen pollution.  Nitrogen pollution is a problem, because it can cause eutrophication of aquatic environments and  “Dead Zones” in the coastal ocean.  It also contributes to climate change, acid rain, smog, biodiversity loss, and more.

Dr. Galloway’s team estimated the nitrogen lost per unit nitrogen consumed for organic food production in the United States and compared it to conventional production. Additionally, they quantified the types of nitrogen inputs (new versus recycled) that are used in both production systems and built a calculator allowing consumers to measure their own nitrogen footprints. Visit the Calculator here! 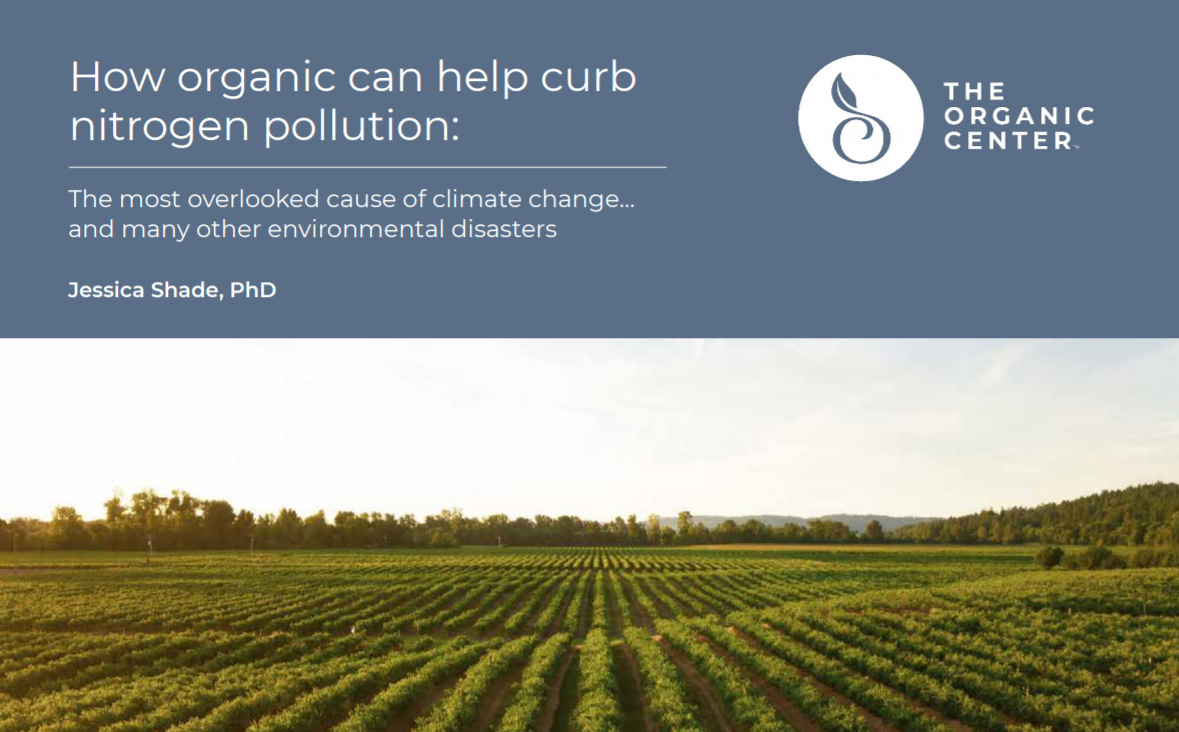 The results from this study show how organic practices can help prevent the global accumulation of an overabundance of reactive nitrogen by relying on recycled nitrogen sources such as compost and other natural soil amendments. While reactive nitrogen is important for life on this planet, it can also react with the environment causing a cascade of negative impacts for both people and ecosystems. Nitrogen pollution contributes to smog, acid rain, forest dieback, coastal ‘dead zones,’ biodiversity loss, stratospheric ozone depletion, and climate change. This study found that not only is organic adding significantly less to the global pool of reactive nitrogen, it can also help put nitrogen waste that could otherwise contribute to nitrogen pollution back into food production.  This study was published in the peer-reviewed scientific journal, Environmental Research Letters. The Organic Center also published a report highlighting the key findings of the study.

What does Organic have to do with Nitrogen Pollution?

Organic farming practices range in their impact on nitrogen pollution, but many common organic strategies, including crop rotations, composting of plant and animal materials, and use of manure as fertilizer, result in higher rates of nitrogen recycling.  Crop rotations prevent nutrient stripping from the soil, and composting plant and animal materials improves nitrogen recycling, reducing the introduction of new nitrogen pollution to the environment.  The use of organic soil amendments rather than synthetic fertilizers provide crops with complex nitrogen sources that are slow to release nitrogen and therefore limit the loss of the nitrogen from the field.

While these organic management practices recycle existing reactive nitrogen in the environment, organic farms also lose some of this nitrogen to the environment during production. Leguminous cover crops protect soil and reduce nutrient runoff and soil erosion, but they also fix atmospheric nitrogen.  These cover crops are often tilled into the soil as green manure, which adds further nitrogen into the soil.  Moreover, organic practices may result in crop yields that are lower than those of conventional practices, because of lower nitrogen availability and greater pest pressure.

Researchers have found (in preparation for publication) that organic production and conventional production are comparable in terms of nitrogen losses during production, but in terms of newly created reactive nitrogen, organic systems have a smaller impact on the environment. Increased nitrogen availability in organic systems is offset by lower organic yields and high within-system variability, resulting in no significant differences between organic and conventional virtual nitrogen factors.  The difference between systems appears when one looks at the average personal nitrogen footprint for new nitrogen contributions, because conventional practices are responsible for a greater amount of new nitrogen being introduced into the system, while organic practices rely on recycling of pre-existing reactive nitrogen.

Use our Nitrogen Footprint Calculator to measure you own personal nitrogen footprint and see how much new reactive nitrogen your activities are introducing into the global system.  As you use the calculator keep an eye out for the pie charts on the left-hand side of the screen.  This chart shows your average contribution of new nitrogen to the environment in blue and recycled nitrogen use in green.  In short, the greener your chart the better for the environment.  Notice that as you increase the amount of organic you eat the chart changes to have a larger green recycled portion.

Notice that as you increase the amount of organic you eat, the less new (blue) nitrogen you introduce to the environment.

In addition to the peer-reviewed article and report, the team added organic to the Nitrogen Footprint Calculator, which can be used by individuals and institutions (e.g., universities, colleges, for-profit organizations, and government agencies) to calculate, track, and manage their nitrogen footprint. The tool is currently used by 18 institutions, which are part of a network called the N Footprint Network.