Spices, herbs and teas are known for healing properties like fighting off infections, building immune systems and adding flavor to your favorite foods.  Add “organically grown” and the health benefits include higher nutritional quality and more antioxidants than non-organic.
"Organic standards prohibit the use of synthetic pesticides, organic helps protect consumers from exposure to pesticide residues that may exceed regulatory limits safe for ordinary consumption and can improve the quality of final products for consumption"

In a recent meta-analysis of 343 peer-reviewed publications on crops and processed crop-based foods that were produced following organic farming protocols, organic products contained higher antioxidant activity (19% phenolic acids, 50% flavonols and 51% of anthocyanins) and 48% lower levels of the heavy metal cadmium. Crops produced without synthetic pesticides contained more than a four-fold reduction in residues. Your best way to avoid heavy metals and increase your antioxidant levels is by choosing organic teas, spices, and herbs. 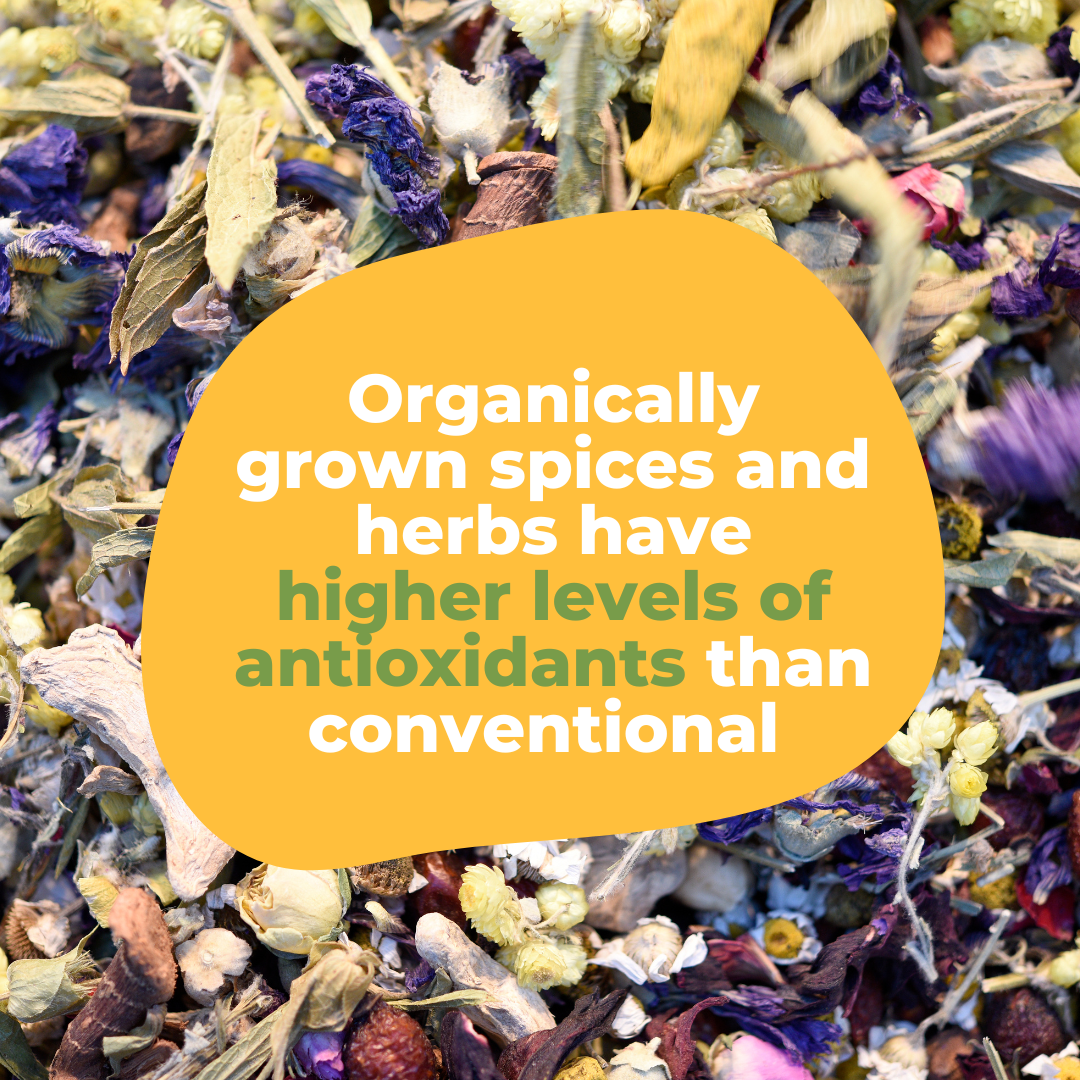 In another study, store-bought samples of organic sage and mint in Poland contained more than 100% higher levels of flavonoids. Another study found a similar result with a 60% increase in polyphenol content in organic tea leaves in Malaysia. More studies are needed to demonstrate the relationship between farming practices and antioxidant levels in organic spices, herbs and teas, but considering existing evidence and the high levels of antioxidants already known as present in spices and herbs, it is safe to assume that organic farming protocols that exclude synthetic agrochemical use impact antioxidant levels.

Choosing responsible spice and tea producers is important as testing for pesticide residues of imported spices, herbs and teas largely fall on the manufacturer prior to milling and bottling due to the high cost of residue screens. According to spice industry professionals, organic spices, teas and herbs receive extra regulatory oversight at ports through process audits which require records to trace compliance with USDA organic standards.

Did you know when using conventional tea leaves you can expose yourself to pesticides during the steeping process? Organic ensures that the standards of production prohibit these toxic pesticides and limit residues.

Reducing pesticide use during production and processing is especially important for dried botanical products like spices, herbs and teas, as the dehydration process can concentrate any existing residues on the fresh product.

According to a 2014 study, in cultures where green and black teas are consumed daily, the practice of over boiling tea leaves should be avoided to help reduce the transfer of soluble and non-soluble contaminants, such as pesticide residues and other impurities in dried tea leaves.

A 14-year survey of imported conventional dried spices and herbs at a Tokyo market detected residues from 37 pesticides from a list targeting organophosphate, organochlorine, pyrethroid, and carbamate pesticides. Most residue detections were in trace amounts, but some exceeded tolerances.